“We were getting very close to a deal then they started to renegotiate the deal. We can’t have that,” Trump said on Thursday. 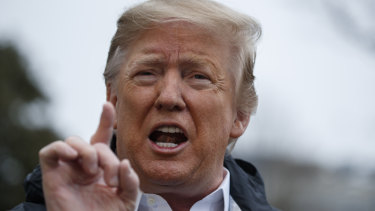 There’s still hope that Donald Trump will strike a trade deal with China.Credit:AP

“I think it will be a very strong day frankly, but we’ll see. We’ll see. It was their idea to come back,” he said, in reference to the Chinese delegation. But he reiterated that he was more than happy to keep tariffs on Chinese goods if a deal could not be reached.

“They’ll see what they can do, but our alternative is, is an excellent one,” the President said, saying that the tariffs were bringing in “billions” to the US government.

Trump’s toughened stance toward China has rattled US businesses, which are bracing for higher tariffs on Chinese imports.

The tariffs that would go into effect on Friday include many consumer products that Americans rely on from Beijing, like seafood, luggage and electronics. The standoff is expected to raise prices for American companies and their customers across a large swath of sectors, potentially sending global stock markets falling.

The talks will resume at 5pm at the offices of the US Trade Representative. Steven Mnuchin, Treasury Secretary, and Robert E. Lighthizer, Trump’s top trade negotiator, will have dinner with Liu He, China’s vice premier, and members of the Chinese delegation on Thursday evening. At midnight, the tariffs higher are expected to be triggered.

Stock markets fell in the United States on Thursday morning, with the S&P 500 index down slightly more than 1 per cent after trading began.

Despite Trump’s affinity for corporate America, its vocal concerns about the damage from the President’s trade war and tariffs have done little to change the White House’s approach.

“Clearly, we think a negotiating strategy based on tariffs is the wrong direction,” said David French, senior vice president of government relations at the National Retail Federation. “We’re certainly hopeful that the Chinese, when they come to Washington this week, come with a plan to make substantial concessions to avert this disaster.” 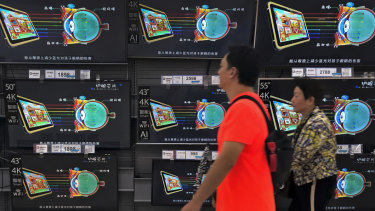 Tariffs that would go into effect on Friday include many consumer products that Americans rely on from Beijing, like seafood, luggage and electronics.Credit:AP

But Trump, already emboldened by a healthy US economy, may be encouraged to keep his trade war going given the monthly trade deficit with China fell in March to its lowest level since 2014 as China slowed its exports to America. The overall US trade deficit with the world increased 1.5 per cent in March to $US50 billion, as it continued to import more goods and services than it exported worldwide.

Retailers wielded their influence successfully in 2017 when Republicans were considering a tax plan that they believed would have harmed their businesses. But when it comes to trade, French said that the Trump administration had been intransigent about their tariff concerns. To make its point, the retail association has been holding events featuring businesses that are suffering from tariffs in politically important states like Ohio.

Most business groups agree with Trump that China treats the United States unfairly on trade. They think that intellectual property protections need to be bolstered and that China’s subsidies of state-owned enterprises must be curbed. Yet they also believe that the economic pain of tariffs makes them a poor negotiating tool.

“When the US and China fight, nobody wins, as the past year’s market gyrations, lost deals, and strained diplomatic ties have made abundantly clear,” said Peter Robinson, chief executive of the US Council for International Business. “American business continues to have major problems with China’s commercial policies, but we simply must find a way to tackle these that doesn’t turn our most competitive companies into collateral damage.”

Robinson suggested that the United States should team up with other trading partners to pressure China to change its ways and work with the World Trade Organisation to adjudicate its complaints.

The United States and China appeared to be closing in on an agreement after more than a year of talks. Despite the sense of optimism, which Trump had often fanned, some of the President’s top advisers signalled last week that the administration was running out of patience. 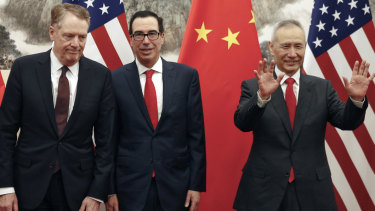 Speaking at the Milken Institute Global Conference in Los Angeles last week, Mick Mulvaney, the White House chief of staff, said that the talks would not “go on forever”. Mnuchin said the negotiations were in their “final laps” and noted that it would soon be evident if it were time to strike a deal or walk away.

Asked at the conference if he was feeling optimistic about the talks, Stephen A. Schwarzman, the chief executive of Blackstone and a confidant of Trump, rolled his eyes and said, “we’ll see”.

Warner Bros.’ DC films are no longer trying to be Marvel, and that’s a...

Scott Morrison re-elected in a ‘miracle’ as Bill Shorten resigns

Most Americans don’t want Congress to overhaul health care, despite ‘Medicare for All’ plans