Internal company emails from 2012 also refer to the use of an ‘on the books’ and ‘off the books’ system to pay staff only a fraction of their hours on the books.

La La group’s Keri Taiaroa did not respond to requests for comment and the group’s website had been taken off-line on Saturday after Mr Taiaroa was contacted by The Sunday Age.

The Hospo Voice union, an offshoot of United Voice, has lodged a complaint with the Fair Work Ombudsman on behalf of three people who have worked at the group.

The complaint says they were underpaid, between them, about $50,000.

United Voice acting secretary Ben Redford said the union had found at least 12 venues on Chapel Street – including the La La bars – that were ‘‘stealing wages’’ from workers.

“Over the last two months we’ve spoken to dozens of workers from Chapel Street and what we’ve found is the full catastrophe,’’ he said.

A current worker at one of La La Group’s bars said they were paid cash in hand at just over $20 an hour and were never given an employment contract.

They were paid a flat rate – with no penalty rates – despite working regularly into the early hours of the morning.

Late-night penalties – depending on the day – should push wages for bar staff towards $30 an hour or higher.

“For such a big-sized group it is kind of surprising,’’ the worker, who asked to remain anonymous, said of being underpaid. “It’s definitely the biggest bar I’ve seen doing this.’’

Other former workers and managers confirmed they had been underpaid via the same method of envelopes stuffed with cash.

There has been a string of wages scandals in Australia in recent years involving some of Australia’s biggest companies and franchises.

An ongoing investigation by The Sunday Age has uncovered industry-wide underpayment in hospitality in particular high-end restaurants. 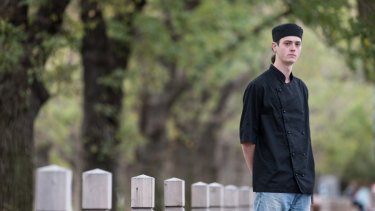 Camilo Gil Soto, who worked at a different Chapel Street venue, said he was underpaid and even not paid for several weeks.Credit:Jason South

Permanent chefs regularly work excessive overtime but are not paid for it.

Hospo Voice have also lodged complaints with the Fair Work Ombudsman on behalf of people who worked at several other unrelated bars to the La La group on Chapel Street.

They include a worker just paid $10 an hour at one bar and other workers who quit after their employer refused to pay them wages for several weeks.

Camilo Gil Soto said he worked at a Chapel Street venue and was underpaid, not paid on time and owed $1600 from just six weeks of work.

“I was a casual and getting paid part-time rates,’’ Mr Gil Soto, a migrant worker from Colombia said. “I spoke to the manager and they never fixed it.’’

Along with two other workers from the same venue, Mr Gil Soto is seeking repayment of thousands in underpayment. A representative from the venue denied the claims.

Mr Redford said the workplace laws were failing and attacked the Morrison government. 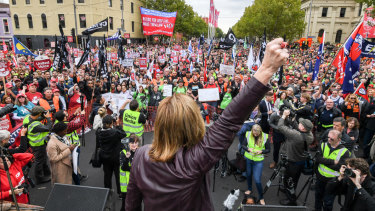 A recent Melbourne union rally in support of changes to workplace lawsCredit:Justin McManus

The Victorian Labor government has said it would make wage theft a crime but is yet to introduce legislation.

Federal Labor is going to the election with a policy for much higher penalties for deliberate wage underpayment, with employers liable to a penalty three times the size of the underpayment.

The Coalition, in government, introduced amendments to the Fair Work Act to boost penalties against employers that underpay vulnerable workers. Those laws have been rarely used so far.

Do you know more? Contact us securely via Journotips

Scott Morrison re-elected in a ‘miracle’ as Bill Shorten resigns

‘No one wants to give in’: Despite warning signs, investors worry about missing out...

If you think your last pay increase was bad, spare a thought for workers...