Are our eggs safe?

Yes, if you cook them thoroughly or buy pasteurised egg-white products.

“From a consumer’s point of view, buying a normal egg off the shelf and treating it with the respect of any raw food product [will eliminate risk],” says John Coward, Director of Egg Farmers of Australia.

The NSW food watchdog agreed. “Eggs are a safe and nutritious food that form part of a healthy diet, provided they are handled and prepared safely,” a NSW Food Authority spokeswoman said.

“There are pasteurised products available for sale in Australia, and the NSW Food Authority encourages consumers and businesses to use such products as an alternative to raw egg when preparing foods that are not cooked.” 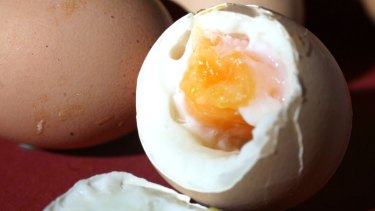 Boiled eggs need to be cooked through to minimise risk.

The authority also said Salmonella Typhimurium-related illness from eggs had declined by 54 per cent from 2014 to 2018, with outbreaks becoming increasingly rare.

What is the alternative?

Spurred on by the recent salmonella outbreaks, one Australian company is looking to pasteurise eggs.

After securing one of eight worldwide licenses from the American food technology company that owns the patent, Australian Pasteurised Eggs says it has the capacity to pasteurise 30,000 shelled eggs an hour. It is looking to extend that to 90,000 an hour, and to build additional facilities around the country.

Sherree Halliwell, the company’s chief marketing officer, says: “It’s exceptionally simple, yet surprising that we haven’t had this technology for eggs before – pasteurisation’s been around for over 100 years.”

Another company is looking to make it easier to track eggs and other food items from farm to plate.

Security Matters owns a patented technology that allows any solid, liquid or gas to be invisibly marked using a chemical-based ‘’barcode’’.

Chief executive Haggai Alon hoped to expand to Australia. “Australia is a focus, because Australia has high standards – so doing it there is the best way to showcase it,” he said. “Everything related to food security and biosecurity in Australia is quite admirable.”

How do you pasteurise an egg?

The process involves the egg passing through a warm water bath, with strains of salmonella and other harmful bacteria reduced by at least 99.999 per cent from both the egg and the eggshell. The shell is then coated with a transparent food-grade wax.

Early attempts at the process cooked the eggs, and many attempts on a commercial scale haven’t been able to manage the different sizes of eggs or thickness of shells.

Salmonella is only eradicated in the cooking process when eggs reach temperatures higher than 63-76 degrees centigrade, depending on how the eggs are served. This means consumers who like their eggs soft-boiled, fried, poached or runny scrambled are potentially putting themselves at risk.

“It’s been a slowish journey because we haven’t actually been able to process any eggs until February this year,” Ms Halliwell said.

The case for pasteurisation

Woolworths sells two pasteurised eggs products; Puregg, a liquid egg white sold in cartons, and Zeagold, a frozen egg white pouch. Both have been steadily growing in demand over the past year.

“While we have no immediate plans to introduce pasteurised eggs, we will assess future opportunities as they arise,” a Woolworths spokeswoman said.

Coles said Puregg was one of their top selling egg products.

Ms Halliwell said particular industries were interested in pasteurised eggs.  “Aged care has jumped on board quite quickly. We’re looking at engaging in airlines and cruise lines, anywhere there’s a lot of people and there could be potential reputational damage for the corporation.”

“The aged care and hospital industries have been calling for a pasteurisation solution for a very long time.”

“Is there an increasing need? In the wider community I would say no. It’s very much a niche market, I don’t see it growing really,” he said.

“To add that extra cost, from what I understand, would not make it commercially viable.”

Matt Bungard is a journalist at The Sydney Morning Herald.