Australia is in uncharted territory as property prices in Sydney and Melbourne – accounting for almost 40 per cent of the total – tumble while unemployment and interest rates remain low. In addition, the surge in the housing market between 2012 and 2017 means only buyers late in the boom are at risk of having a loan worth more than their home.

As a result, this FSR focused heavily on highlighting the potential threats at home and abroad, while noting that at present there are no imminent dangers.

“Global economic growth has slowed and downside risks to activity seem to have risen,” the central bank said. “This increases the likelihood of a sharp decline in growth which could be detrimental to financial stability.”

It warned that China’s “delicate balance” between stimulating a slowing economy and addressing financial stability risks “could falter.”

The RBA in February dropped a tightening bias in favor of a neutral stance for the cash rate, which has stood at a record- low 1.5 per cent since 2016, as weakening consumer spending slowed economic growth. 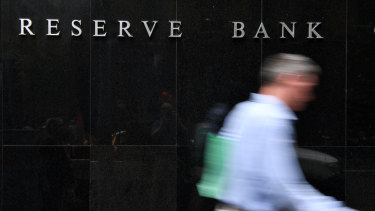 The RBA is expected to cut rates this year. Credit:AAP

The central bank again today highlighted Australians’ high debt levels, saying while households remain in a good position to meet their debts, it increases the financial system’s vulnerabilities to a “sharp deterioration” in economic conditions.

It said housing-related risks would increase with a rise in unemployment — currently at an eight-year low of 4.9 per cent — or “further substantial price declines.”

The central bank estimated Sydney and Melbourne housing prices remain 40-50 per cent higher than in 2012. But, it said: “the large ongoing increase in the supply of apartments, particularly in Sydney, will put further downward pressure on prices.”

While houses have an average financial buffer of a little over 2-1/2 years on their mortgages at current interest rates, almost 30 per cent of loans have no or little buffer.

Meantime, in the western city of Perth and northern city of Darwin, property prices have slumped 18 and 27 per cent respectively since 2014. Underscoring the struggles of the former mining regions, the RBA said Queensland, Western Australia and the Northern Territory account for about 90 per cent of all mortgage debt in negative equity.

Amid the gloom, the central bank remained confident that the financial system is more resilient following a wide-ranging inquiry into misconduct, higher capital levels and tighter lending standards.

It noted stress tests of the banks indicate they can withstand double-digit unemployment and house-price falls exceeding 30 per cent. It also noted they’d held up well in the real-life, if smaller, stress test occurring in Western Australia.

Uber Eats launches platform so you can charge your company for your work lunch...