Amy Schumer’s pregnancy takes center stage in her new Netflix comedy special, “Growing.” Early on in the show, the comedian and actress talks about just how difficult it is to be pregnant at the same time as the Duchess of Sussex.

“I’ll tell you who it’s not fun to be pregnant at the exact same time as ― Meghan Markle,” she tells the audience. “I think we’re, like, to the day the same amount pregnant.”

Apparently at the time Schumer wrote her material for the show, the duchess was not yet showing ― which enraged Schumer, since people were meanwhile asking her if she was near the end of her pregnancy.

“She’s out there in six-inch heels, adorable outfits and there’s been no bump. She, like, cups where the bump will be,” Schumer said, before miming Meghan’s actions with a microphone stand.

“People see me, they’re like, ‘Oh, the last couple of weeks are the hardest, right? Are you crowning? I think I can see an ear,’” she added. 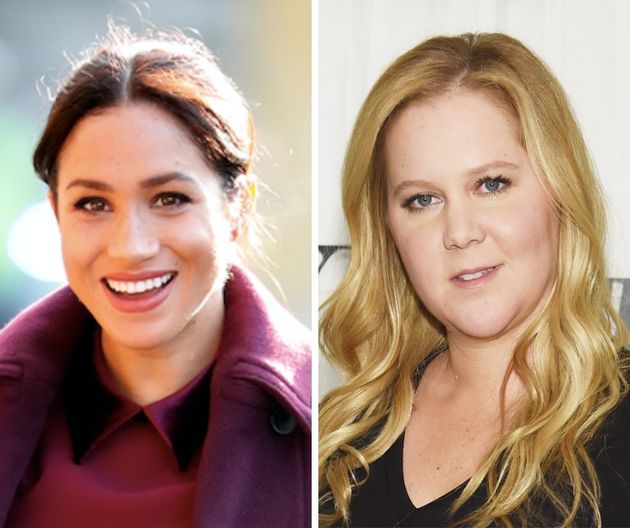 Schumer has previously talked about sharing her pregnancy spotlight with the former “Suits” actress, whom she has jokingly dubbed her “nemesis.”

“Why is she my nemesis? Because she’s pregnant at the same time as me and I’m not letting her get away with that,” the comedian said in a December InStyle segment titled “How To Not Give A Shit What Anybody Thinks.”

The 37-year-old (who is also the same age as the duchess) tied the knot with Chris Fischer in February 2018. She later announced that the two were expecting their first child, just days after Prince Harry and Meghan shared their own pregnancy news with the world.

Fittingly, Schumer pasted photos of her and Fischer’s heads over pictures of Harry and Meghan to help make the big announcement:

Now the race is on to see who gives birth first. Meghan is due around the end of April or beginning of May. Your move, Amy!

Royal news doesn’t stop at the wedding. Subscribe to HuffPost’s Watching the Royals newsletter for all things Windsor (and beyond).

Caterpillar is set to report earnings before the bell — here’s what the Street...

Markets bolstered by strong US payrolls