This week, after traveling 91 points between a low of 2,801 on Monday and a high of 2,892 Thursday, the market finished the five sessions 0.8 per cent lower, even as Chinese equities fell for the fourth time. After closing at a four-month high on Monday, the Cboe Volatility Index declined three of the next four days.

Monday was one of the worst sessions of the year, with the S&P 500 dropping 2.4 per cent on news that Beijing will retaliate with higher Chinese tariffs. But as traders in Asia and Europe braced, US investors jumped in to to buy the dip.

All told, the S&P has on average fallen 0.5 per cent overnight and gained 0.2 per cent during the day since the trade spat re-erupted two weeks ago. That gap is the biggest disparity since July 2009, data compiled by Bloomberg show.

“If we get that next wave of negative indicators about ‘the US and China are irrational, we can’t deal with them,’ then we’ll see some kind of pullback,” said Mariann Montagne, portfolio manager at Gradient Investments. “But at some point this year, I do think they’ll come to some mutually agreeable decision and we’ll get the earnings growth and the market expansion based on that alone.”

The willingness to push stocks up every time they fall reflects a widespread belief that no swoon will stick. Going by data released by the Conference Board in its consumer confidence assessment for May, the share of Americans who expect equity prices to decrease is currently the lowest since October. 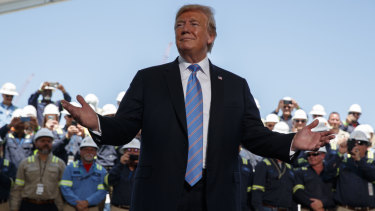 A US-China trade deal is expected to be reached but Trump’s volatility has market watchers concerned.Credit:AP

Part of that is the belief that the US and China will strike a deal sooner or later. But while most strategists don’t see a full-blown trade war as their base-case scenario, they warn about significant risks to markets should the worst come true. A permanent increase in tariffs on Chinese goods will shave $US4 to $US8 from the S&P’s next year’s per-share earnings, according to Sanford C. Bernstein. It will send the S&P to 2,550, says JPMorgan Chase & Co.

Still, an outright trade war isn’t what Wall Street is bracing for. Strategists from JPMorgan to Goldman Sachs stood by year-end forecasts, saying it’s hard to change their calls solely on the basis of trade headlines.

Investors pulled $US8.1 billion ($11.8 billion) from US stocks and ETFs in the five days through Wednesday, it fell short of the $US13 billion outflow a week before, data compiled by EPFR show.

“There is no doubt, there is this fear that things will get worse and stocks will tumble, but then there’s a lot of greed, what if we keep on going up?” said Donald Selkin, chief market strategist at Newbridge Securities.

“We need to assess what kind of effect the tariffs have on companies, but it’s a little early. It will be hard to get back to previous highs, but a lot of people think we’re not going to turn south.”

‘I hope it gets back on track before I die’: AMP shareholders optimistic

Shorten victory to ‘accelerate the slowdown’