While some corners of Trump’s business empire have thrived, such as his Washington D.C. hotel, others have suffered from his high unpopularity. Rounds of golf are down at his public course in New York, a clutch of once Trump-branded buildings have torn his name off their fronts, and an ambitious plan to launch a new mid-tier hotel chain across the country fizzled.

Trump is scheduled to provide an updated snapshot of his net worth this week, with his annual financial disclosures due Wednesday. The documents won’t go into detail about the Trump Organisation’s revenues, but it’s clear that Trump Tower is suffering, based on securities filings, property records, real estate listings, and interviews with industry insiders.

The commercial portion of the building has been struggling for months to find tenants for more than 42,000 square feet of vacant office space, despite advertising rents well below the area’s average, listings and data from real estate brokers show.

On any given midweek afternoon, the number of government and Trump Organisation security personnel rivaled the number of other people inside the building’s atrium.

Trump Tower’s occupancy rate has plunged over the last seven years to 83 per cent from 99 per cent, giving it a vacancy rate that’s about twice Manhattan’s average.

“If I were looking for office space, that would be a building I’d want to avoid,” said Edward Son, until recently a market analyst for CoStar Group.

Net income slightly rose last year, boosted by the tenancy of his 2020 campaign committee, which has spent more than $US890,000 ($1.28 million) over the last two years to rent space in Trump Tower, according to Federal Election Commission records.

The building’s net income is still about 26 per cent lower than what bankers expected when they evaluated Trump’s fitness for a $US100 million loan in 2012. Even so, Trump Tower regularly produces an annual profit for its namesake. Last year, the building generated $US10 million in net cash flow, after taking into account its annual $US4.3 million interest payment on the loan, according to Trump Organisation disclosures.

The Trump Organisation didn’t respond to requests for comment. 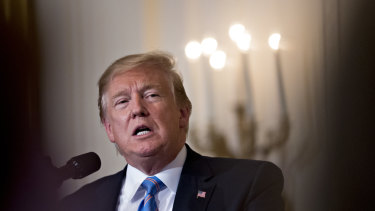 In liberal New York, businesses associated with Trump have fallen out of favour. Credit:Bloomberg

Condo owners hoping to run into the president on occasion have been disappointed. While Trump ran his presidential campaign out of the high-rise, he’s only visited 13 times since his inauguration, according to a count from NBC News.

Michael Sklar sold his parents’ 57th floor unit for $US1.83 million in October after they spent $US400,000 to remodel the property. His family purchased it for $US1.4 million in 2004, which comes out to $US1.84 million after adjusting for inflation.

“No one wants in that building,” Sklar said.

After Trump’s election, living in his tower became a hassle, Sklar said. His mother, who was battling cancer, took cabs to the building from the airport, and she used to be dropped off right in front of the entrance. After the election, security would force her cab driver to drop her off a few hundred feet from the front door, requiring a long and painful walk home.

“The name on the building became a problem,” Sklar said.

At least 13 condos in the tower have sold since Trump’s 2016 election, property records show. For the nine transactions where New York City records show what the seller originally paid for the property, eight sold at an inflation-adjusted loss.

By contrast, just 57 homes in Manhattan sold over the past two years at a loss, out of 24,871 third-party sales, according to PropertyShark, although the firm doesn’t adjust for inflation.

“The luxury market is softening,” said Matthew D. Hughes, a Manhattan-based broker at Brown Harris Stevens. “But it’s rare that someone owns an apartment here for 10 years and takes a loss.”

One New York real estate agent, who didn’t want to be identified discussing Trump, said that clients have repeatedly told him not to show them units in Trump buildings.

These days, gawkers sometimes outnumber the customers of the building’s remaining retail stores.

Res remembers the building fondly, and said that when it was built Trump recruited celebrities to purchase its condos and prominent brands to fill its retail space. “It’s dated but it’s a building worthy of respect,” Res said. 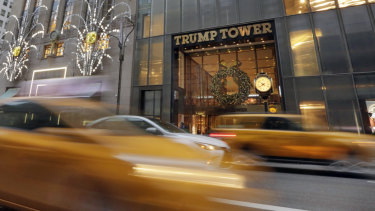 Residents say that the name of the building “has become a problem.”Credit:AP

Advertised as having 68 stories – it’s actually 58, city records show – the building was ahead of its time, Trump’s lawyer, George Ross, wrote in his 2005 book, “Trump Strategies for Real Estate.” “He single-handedly created the market for high-end luxury residences in New York City,” Ross wrote.

The Apprentice, Trump’s reality show on NBC, was filmed in Trump Tower. Its launch in 2004 gave the building a new prominence and helped Trump revive his personal and corporate brands. In 2013 Trump pegged the value of his brand at $US4 billion, according to unaudited statements of financial condition provided by his former personal lawyer, Michael Cohen.

By most measures, Trump Tower should be doing well these days. It’s in a part of Manhattan known as the Plaza District, named after the Plaza Hotel right off Central Park, that many real estate experts consider to be the nation’s premier office area. Offices with views of Central Park easily fetch more than $US100 per square foot, said Craig Leibowitz, New York research director for JLL.

The office portion of Trump Tower is advertising five vacancies spread across five floors. In January, prices for the open space ranged from $US72 to $US85 per square foot annually. A month earlier, the Trump Organisation posted to its YouTube channel a glossy marketing video that referred to the tower as “one of New York’s most iconic trophy buildings.”

Now the prices are listed as negotiable.

“Any of the buildings that have been really successful in Midtown are either newer class or the landlords have spent considerable capital to make them more modern and have more amenities,” said Louis D’Avanzo, managing principal of Cushman & Wakefield Plc’s Midtown Manhattan office.

Trump hasn’t spent much money updating Trump Tower in recent years, according to disclosures to investors.

“I don’t think I would want an office in Trump Tower,” Res said. “Why would you go there? It’s a wonder he doesn’t have 50 per cent vacancy.”

‘It was outrageous’: Sonja’s insurance premium doubled when her home was heritage-listed