Business investment in the UK rose 0.5 per cent in the first quarter of the year compared with the previous three months, defying economists’ expectations of a further contraction to end a year of decline. But it remained low both by historical standards and compared with similar economies.

Delayed upgrading and labour shortages are likely to have contributed to the rebound but Brexit uncertainties are expected to continue to weigh on decisions regarding further spending.

The Office for National Statistics warned that business investment data were subject to revision, but economists said the need to upgrade production tools after long delays and labour shortages could have helped spur investment growth in the first quarter.

“It may be that some companies had an increased need to replace or upgrade some plant and equipment having delayed their plans over the past year or so,” said Howard Archer, chief economic adviser at the EY ITEM Club.

According to a survey by the CBI industry body, the highest proportion of manufacturers since October 1979 cited replacement as a reason for expected capital expenditure in the year ahead. 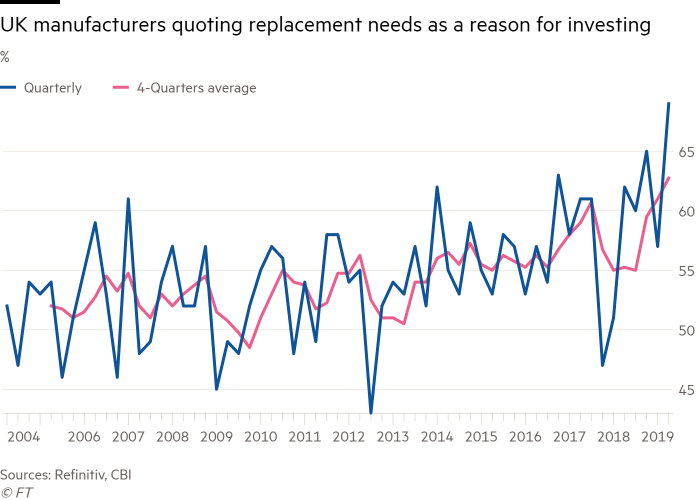 Labour shortages are also thought to have contributed. In its latest inflation report, the Bank of England noted that the UK’s tight employment market — together with the low cost of finance and robust return on capital — should “increase firms’ incentive to invest”. This is because businesses could increase production capacity via higher productivity rather than by hiring more workers.

In the three months to March the number of job vacancies increased by 32,000, while the unemployment rate was at the lowest level since the mid-1970s.

However, despite the rise over the previous quarter, business investment was still down 1.6 per cent compared with the first quarter of last year and it performed less well than other parts of the economy, historical standards and the UK’s peers.

Private sector spending on investment is broadly unchanged since the second quarter of 2016, when the UK voted to leave the EU, in contrast with a 4.8 per cent expansion in the UK economy as a whole and a 5.7 per cent increase in household consumption expenditure. 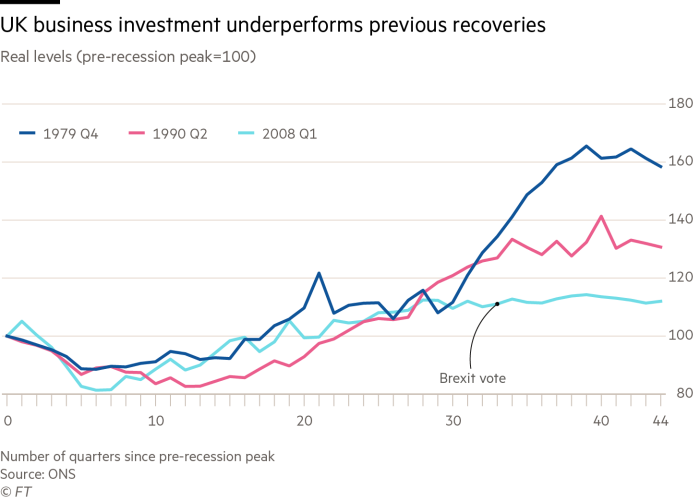 The UK stagnation since mid-2016 compares with a 15 per cent rise in business investment in the US.

Business investment is up by only 11 per cent since the financial crisis, compared with a 60 per cent increase over the same period since the recession in the 1980s.

ONS data do not split business investment by asset, but across both the private and public sectors spending on transport equipment was the worst performer in the first quarter.

Real spending on transport equipment was down 35 per cent compared with the second quarter of 2016, driven by a fall in investment by airlines, according to the Bank of England. Spending on intellectual property was more resilient, rising by nearly 8 per cent over the same period, while investment on information and communication technology rose 2.3 per cent. 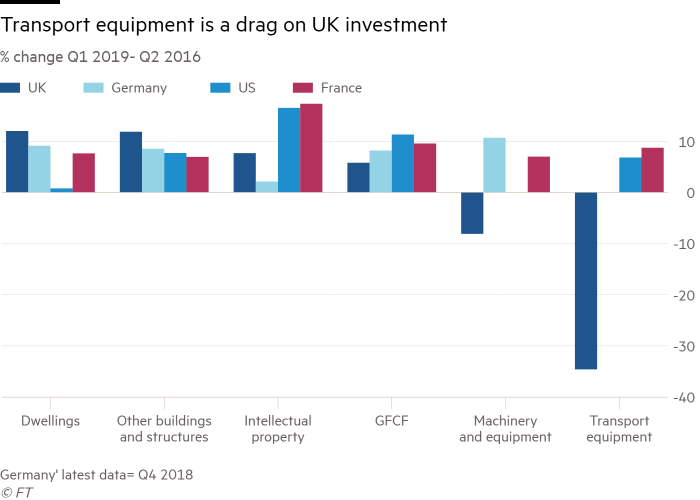 Data from the OECD, the Paris-based organisation, show that the fall in investment in transport equipment in the UK was larger than in peer economies.

The long shadow of Brexit

Economists expect a pick-up in investment once Brexit uncertainties wane, as companies commit to spending that has been delayed.

But surveys suggest that the country might not be at the turning point yet. In April, manufacturing and services business investment intentions dropped to their lowest level since the financial crisis, according to the Bank of England business conditions survey. 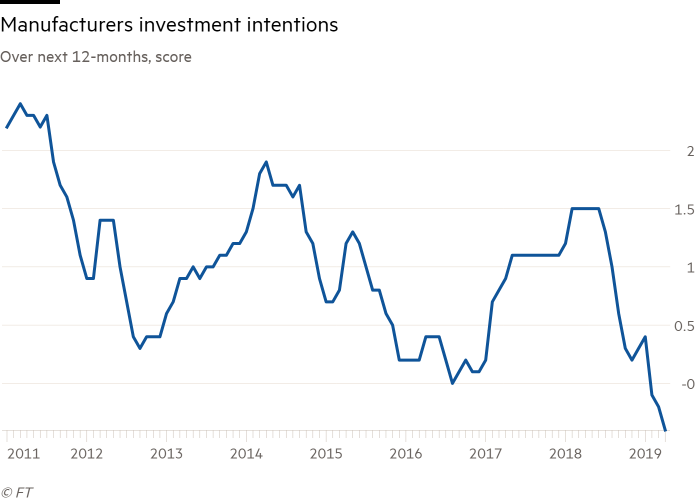 “While recent Brexit extensions have alleviated the acute uncertainty that businesses were facing in the near-term, they appear to have done little to give companies the certainty that they need for longer-term capital spending projects,” said Alpesh Paleja, principal economist at the CBI.

Business investment plans would also depend on their expectations about the UK’s future relationship with the EU.

“A number of companies may well be wary about stepping up their investment in the immediate aftermath of the UK leaving the EU, even with a deal,” said Mr Archer. “They may want to see how the UK economy performs for a while after Brexit before committing themselves, especially to costly investments.”

Amazon workers too scared to pray

Netflix should take a cue from ‘Game of Thrones’ and ditch binge-watching for new...