Morrison wants you to think it means that taxes always discourage economic growth. This notion suits many well-off people who’d love to pay less tax, but that doesn’t make it true.

Say by some miracle we lived in a world with no taxes. It’s not clear that if we had no one enforcing laws, the roads were shocking, and only the rich could afford to educate their children or see a doctor, the economy would be much bigger and faster growing. 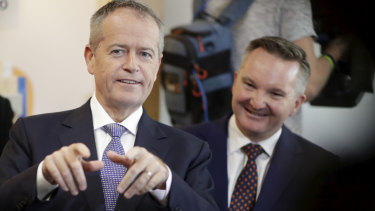 Labor’s negative gearing plans have caused caused alarm among some of the electorate.Credit:Alex Ellinghausen

On the other hand, it would be true that taxes held back the economy’s growth if governments collected a lot of tax and then buried the money in a hole.

In the real world, however, governments spend almost all the money they collect in taxes (if not more). Some of that money may be wasted, but much of it does a lot of good – to the economy and the people who make up the economy.

We all benefit from living in law-abiding country, with decent roads, low-cost education and good healthcare, not to mention the high wages our educations and health enable us to earn. Our businesses also benefit from operating in such a country.

There would be more truth in Morrison’s line if he changed it to say “you don’t grow the economy by taxing it less” – you just leave some people better off and others worse off.

Which brings us to Frydenberg’s remarkable claim that his $300-billion tax plan – where the first stage goes mainly to middle income-earners, but the two later stages go disproportionately to people earning a lot more than $100,000 a year – will make the income tax scale more “progressive” rather than less.

As I explained in detail in this column a month ago, a progressive tax is one that takes a progressively higher proportion of people’s incomes as incomes rise.

But two economists at the Australian National University’s research school of economics, Associate Professor Chung Tran and Nabeeh Zakariyya, have produced a more sophisticated analysis, using the Suits index (invented by Daniels Suits) to express our income tax scale’s progressivity as a single number, and then see how it has changed over the years.

Unsurprisingly, they find that our income tax scale is and always has been progressive (and will stay progressive if the Coalition’s tax plan comes to pass).

More surprisingly, the authors found that the scale’s degree of progressivity changes from year to year, and tends to move in cycles of greater and lesser progressiveness.

What factors cause these cycles? Government-initiated changes in the scale, obviously, but also changes in the distribution of pre-tax income between income-earners and – a big one – the effects of “bracket creep” as inflation pushes people onto higher tax brackets or otherwise raises their average rate of tax.

Significantly, the authors confirmed Treasury’s contention that bracket creep reduces progressivity – that is, it favours high income-earners (who don’t have a higher tax bracket to be pushed onto).

They find that the income tax scale’s progressiveness declined in the Howard government years between 2001 and 2006, but then increased sharply, reaching a peak in 2010 (during the Labor years), but since then has declined slowly (thanks to bracket creep and the absence of tax cuts as governments gave top priority to reducing the budget deficit).

Frydenberg’s claim that his three-stage tax plan would make income tax more progressive seems based on the fact that the top tax rate would be unchanged at 45¢ in the dollar while some lower rates fell and, according to Treasury’s debatable projections, by 2024 the top 5 per cent of taxpayers’ share of total tax paid would have risen from 32.7 per cent to 32.9 per cent.

Should his plan actually come about, the Suits index will tell us whether it really has made income tax more progressive rather than less. Since people on $200,000 will have their average tax rate cut by 4.5¢ in every dollar of income, I very much doubt it.

Ross Gittins is the Economics Editor of The Sydney Morning Herald.

Adidas may have underestimated Tiger, and this small private equity firm could win big...

General Motors might be the largest U.S. automaker, but it could not survive in...