CNBC’s Jim Cramer said Thursday that his colleague is warning that danger could be on the horizon for the stock market.

The “Mad Money” host took a look at chart analysis as interpreted by technician Carolyn Borogen, Cramer’s coworker at RealMoney.com who also runs FibonnacciQueen.com, to understand what could come of this volatile market.

The major U.S. averages were taken for a ride this week as investors attempted to gauge whether the United States would raise existing tariffs on imports from China on Friday. Because of this uncertainty, the best way to get an empirical reading of the market is through studying chart action, Cramer said.

The high-to-high cycles, as explained by Boroden, in the weekly chart of the S&P 500 is cause for concern, the host said. 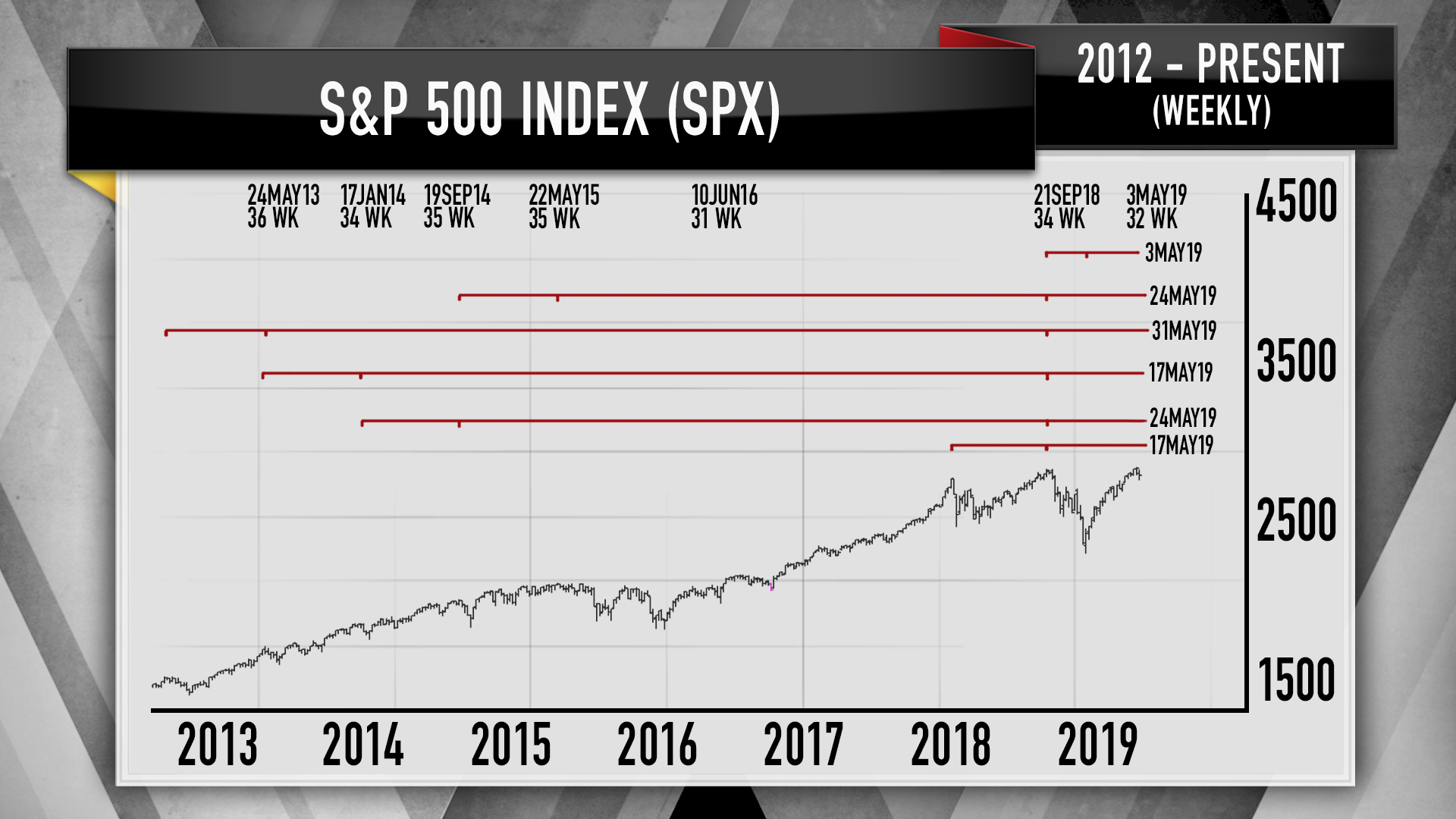 Highs on the index have ranged between 31 weeks and 36 weeks, and the most recent peak was recorded last Friday, he said. Prior to that, the last major high was set in September, which preceded the stock sell-off in October.

Markets tend to repeat themselves, and because stocks sold off this week after a big run, Boroden thinks there could be cause for concern.

“In fact, she’s looked at a series of previous high-to-high cycles, and what she’s noticed is that there’s a whole confluence of them coming due this month,” Cramer said. “That’s why she’s throwing up a caution flag, because Boroden thinks we might finally get a deep downside correction — even deeper than what we’ve already experienced during hell week.”

Wall Street has almost made it through a “hell week” of stock selling and investors can begin to pick through the rubble, Cramer said.

U.S.-China trade turmoil and Uber’s looming IPO laid out a tough week for the markets, and now the last trading day of the week is here.

Find out what stocks Cramer said are winners here

President Donald Trump has the upper hand in trade talks with China despite false claims that he made at a Wednesday rally with supporters in Florida, Cramer said.

He refuted Trump’s suggestion that the United States should welcome tariffs on imports from China because the Chinese pay for them.

“The whole theory feels more than a little Orwellian to me, because strictly speaking it’s just not true. Americans pay these tariffs,” the host said. “But if you haven’t noticed, we’ve been living in a post-truth world for a long time now.”

At the Panama City, Florida rally, Trump said that China “broke the deal” and that the world’s two largest economies have been in negotiations over for months. Cramer said Trump is taking a hard-nose approach because he’s convinced that America can afford to end business ties with China, and his strategy could ultimately work.

Shares of Etsy tanked more than 10% on Thursday after posting a slight revenue miss in its quarterly earnings report.

CEO Josh Silverman shrugged off the decline, telling CNBC’s Jim Cramer that the mixed first quarter results were better than he had projected in March.

“Q1 started out a little rocky as we said and then ended really strong,” he said in a one-on-one with the “Mad Money” host. “We raised guidance, so we feel really good about the start that we’re off to.”

A large part of it is not being regulated by surgical products. Consumer products

“A large part of it is not being regulated by U.S. branded pricing. It gives people, we think, a very important place to look at health care, but not be concerned about the U.S. branded prescription pricing situation.”

In Cramer’s lightning round, the “Mad Money” host zips through his thoughts on caller stock picks of the day.

Zebra Technologies Corp.: “It’s a fast-growing company. We’ve championed it ever since they made the acquisition not that long ago. This is [CEO] Anders Gustafsson. You can look at his excellent interview where I thought he handled himself well. Yes, they did not make the quarter as people wanted, but I’m sticking by it because barcode technology is, again, the way of the future, other than when you’re dealing with Etsy, which doesn’t care for it.”

EQM Midstream Partners LP: “Anyone of these that has higher than a 10% yield, let me tell you something: they are vulnerable. I’m gonna have to say don’t buy.”

Exelixis Inc.: “We have liked it. Good spec. They do kidney cancer, it’s incredibly hard to solve kidney cancer. I know that, but I know that if they do break through it, it’s gonna be incredible. So let’s hold on to that.”

Cramer Remix: The catalyst for this bank stock should create tremendous value