Using a data set spanning nine predominantly English-speaking countries, researchers delineated a number of key findings. First, men are much more likely than women to master the art of hyperbole, as are the wealthy relative to the poor or middle class. North Americans, meanwhile, tend to slip into this behaviour more readily than English speakers in other parts of the globe. And if there were a world championship, as a true devotee might appreciate, the title would go to Canada, data show.

The study drew from the Program for International Student Assessment, which is administered to tens of thousands of 15-year-olds worldwide. The test included a background questionnaire that captures demographic information, along with students’ attitudes towards the subjects they study in school. That section of the test included the questions about maths knowledge.

The data revealed that boys across all nine countries were significantly more likely than girls to pretend expertise, with the difference between the two working out to nearly half a standard deviation in some countries – a big gap, statistically speaking. 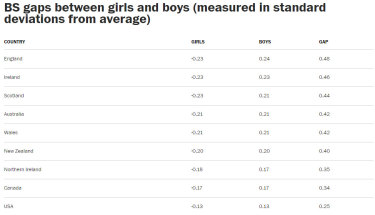 Interestingly, the gender gap for this trait in the United States is the smallest among the countries studied, about half the size of the gap in England. Americans are, perhaps, more egalitarian in our exaggerations than our peers across the Atlantic.

There’s also a significant class-based difference, with respondents from the wealthiest households showing a greater proclivity toward overstatement than those from the poorest. As with gender, however, the gap in the United States is the smallest among the countries surveyed. 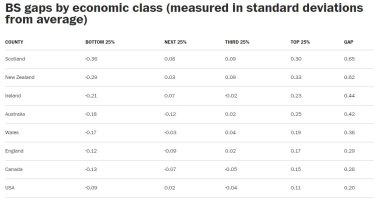 Finally, a between-country comparison finds that young people in Canada and the United States are the most likely to over-sell themselves overall, but those in Europe are much less likely to engage in such behaviour.

Taken as a whole, the results appear to suggest that the countries with the greatest propensity toward bombast also have the smallest variances between groups living within them. In the US and Canada, for instance, there may simply be so much BS going around that everyone ends up taking part in it.

In Europe, the trait is less widespread but more confined to males and the wealthy. That may result in less pressure on women and the non-rich to enhance their social standing through pretense. 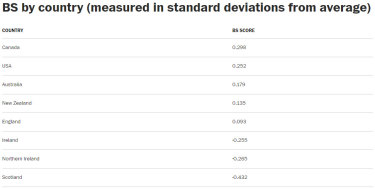 The study also found that the true practitioners are more likely to “display overconfidence in their academic prowess and problem-solving skills”. The individuals most likely to claim to be maths whizzes, in other words, are also the most likely to claim expertise in subject areas that don’t exist. That finding suggests that people who are particularly boastful of their abilities should be treated with some scepticism.

Nevertheless, the study gives reason to believe there’s a useful life skill to be had here, such as the ability to bluff your way to success. “Being able to bullshit convincingly may be useful in certain situations (e.g. job interviews, negotiations, grant applications),” the study authors write. That would be a plausible explanation for why kids from wealthy families are more likely to adopt this behaviour: they’re taking cues from their successful parents.

The study also suggests that men’s higher propensity toward this behaviour “could help them earn higher wages and explain some of the gender wage gap,” said study co-author Nikki Shure. “This has important implications for thinking about tasks in job interviews and how to evaluate performance.”

One caveat to consider is that the study subjects were adolescents. Though it seems a good bet to assume that personality traits developed as teens will carry over into adulthood, this study isn’t proof of that. “These 15-year-olds are most likely already thinking about applying to university or entering the labour market, both of which are points during which bullshitting may serve as an advantage,” Shure said.

The authors also point out that their study was narrowly defined and restricted to the realm of mathematics. “Ideally,” they wrote, “future research should try to include a greater number of fake constructs in order to maximise precision of the bullshit scale.”

Cramer Remix: There aren’t enough safety zones in this market, so don’t buy into...

Here’s why you should treat preliminary auction clearance rates with caution, especially in Sydney