In November, several employees organised a company walkout over payouts to executives facing sexual assault allegations. Around that time, the activists gathered 350 accounts of employee concerns.

On Monday, two of those organisers, Meredith Whittaker and Claire Stapleton, wrote an email saying Google had punished them because of their activism. The two asked staffers to join them on Friday to discuss the company’s alleged actions, and during the meeting they shared more than a dozen other stories of internal retribution that they had collected over the past week. Like many meetings at Google, participants could watch via a video live-stream and submit questions and comments. 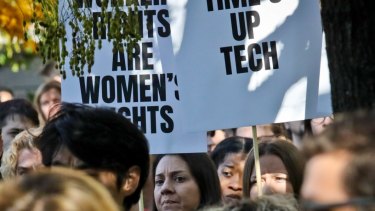 “Now more than ever we need to reject retaliation, and reject the culture of fear and silence that retaliation creates,” read an email from the event organisers, which Bloomberg News viewed. “The stakes are too high.”

“We prohibit retaliation in the workplace and publicly share our very clear policy,” a Google spokeswoman said in an emailed statement. “To make sure that no complaint raised goes unheard at Google, we give employees multiple channels to report concerns, including anonymously, and investigate all allegations of retaliation.”

This is a pattern, these are systemic issues, and we will change it only by speaking up and acting together.

Whittaker is a researcher at Google specialising in artificial intelligence. She co-founded a research group, AI Now, that is affiliated with New York University. Whittaker wrote to her colleagues in an email that she was told she would have to “abandon my work on AI ethics.”

Stapleton, who works in the marketing department at YouTube, alleged that she was informed she was being demoted and later told to take a medical leave she didn’t need. After she retained a lawyer, Stapleton said, the company “walked back my demotion, at least on paper,” but “the environment remains hostile and I consider quitting nearly every day.” 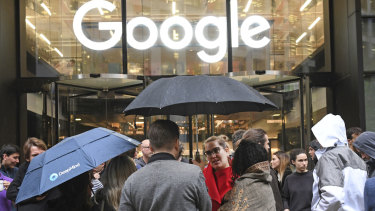 In the email, Stapleton said that she arranged a meeting with Google’s human resources division after flagging changes to her job. She was told to go on sick leave. When she replied that she wasn’t sick, Stapleton wrote, the HR director said: “We put people on it all the time.”

On Friday, Whittaker and Stapleton shared additional information about their situations in an internal post to colleagues.

Whittaker said that her manager, whom she did not name, told her that her AI ethics work “was no longer a fit.” The manager said Google’s cloud division had plans to massively increase sales by “being everywhere Lockheed is,” according to Whittaker. That’s a reference to the defense company Lockheed Martin Corp. Google’s work with the U.S. military was the subject of employee protests last year. A Google spokeswoman declined to comment on the mention of the cloud business.

Whittaker tried to get transferred to another Google AI team, a move she said was supported by Jeff Dean, the company’s head of artificial intelligence. Soon after, Whittaker was involved with another protest: an employee petition against the appointment of Kay Coles James to an AI ethics counsel organised by Google. The company ended up scrapping the group.

Two weeks after the petition, Whittaker said she learned that her planned transfer had been cancelled and that her role at Google would be changing. “Continuing my work at AI Now and my work in AI ethics was not on the table,” she wrote.

Oona King, Google’s director of diversity strategy, rejected at least one of the employee’s claims. “I can genuinely say when I’ve looked at the details of one of the cases, it isn’t as it appears here,” she wrote, according to a message viewed by Bloomberg News.

Executives at YouTube and Google Cloud sent messages to staffers earlier this week disputing the accounts of Stapleton and Whittaker, according to a person who had seen them.

Several current and former employees took to Twitter on Friday to register complaints using the hashtag #NotOkGoogle, a riff on the company’s virtual assistant product. “This is just the tip of the iceberg,” wrote Alex Hanna, a member of Google’s cloud division.

“I am grateful that I quit Google,” wrote Liz Fong-Jones, an engineer and outspoken critic who left the company earlier this year.

“This is a pattern, these are systemic issues, and we will change it only by speaking up and acting together,” Stapleton wrote in the email.

Google management publicly endorsed the employee walkout in the fall, giving the blessing for staff to vent frustration. But as dissent continued to rise inside Google, the company’s lawyers urged the U.S. government to give companies more leeway to reign in rebellious employees from organising over workplace email.

Google made that argument in an ongoing case before the National Labor Relations Board involving alleged retaliatory discipline against an employee. On Monday, a new complaint was filed with the agency accusing Google of retaliating against staff for discussing and protesting working conditions.

The filing alleges that within the last six months, one or more employees suffered transfer, demotion, or “other adverse action,” and that the company acted “in order to discourage employees from engaging in” the type of collective action that is protected by U.S. federal law.

The identity of the person who made the filing was redacted in the copy obtained by Bloomberg News via a Freedom of Information Act request. The matter has been assigned to the NLRB’s regional office in New York.

Stressed victims of the start-up whirlwind | Business – The Times

Strategists are warning about possible ‘flash crashes’ in currency markets as Japan goes on...