I doubt he would have tried to physically stand in the way of queue jumper if he was outside of his four-wheeled castle.

Fans of social media like to emphasise the social element, while overlooking that “a medium” is something that sits between the sender and recipient. It presents a barrier, which typically means one does not see the whites of the eyes of the receiver. It frequently has the same effect on our inhibitions as our emboldened road ragers.

How else can we explain the intemperate rantings that make up about three-quarters of social media posts? The problem is that not every bit of potentially defamatory vitriol emanates from 14-year-olds in their insufficiently monitored bedrooms.

Nor are they all men living in their mother’s basements, as Scott Morrison recently suggested. Aside from the fact it is an exceptionally narrow demographic in Australia who actually have a basement, it ignores the likely considerable number of well-educated people in good careers that are up to no good. And Donald Trump of course. 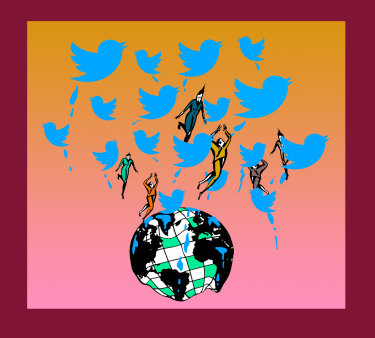 Those in corporate life, owners of businesses small, medium and large, are on Twitter, Instagram and Facebook broadcasting the same banal stuff as the rest of us. Most of the time their “angry” messages are ones many could “like”, such as save the bees, or be nice to each other, or remember to breath. Then there are those career-killing ones such as “my boss is sleeping with Jones from accounts”.

It is a short step from tweet to tabloid, with newspapers increasingly monitoring tweets, or getting tip-offs from the twitterverse. The ensuing splash, retractions and explanations can be devastating for the careers of these tweety-pies, their employers, or their own businesses.,

Would these keyboard warriors have said the same thing had they seen the white of their nemesis’ eyes? As observers we don’t know, perhaps they have. And this is the point. Were it not for the public tweets and the viral explosion that can follow, we’d all be none the wiser.

A little reflection should be enough to appreciate that settling disputes or grievances via a public medium should really be the last resort, unless the purpose is deliberately to besmirch the other party. Yet, it is so easy to feel powerful from behind the keyboard and to translate impulse or reactive emotion into a public statement. In the event of a car crash, most bystanders don’t want to get involved, but love to have a good gawp at the wreckage. The public do not need to be involved with most disputes, so why conduct them in public if you can avoid it?

If someone or something at work has irritated you, resist the temptation to broadcast your reaction. Work out who (if anyone) needs to hear your gripes, how your message will likely be received and how best you can deliver your message in a constructive manner only to those who need to hear it. Rarely will that involve social media.

If you really must fire, do it discreetly and avoid getting fired yourself.

Jim Bright, FAPS, is Professor of Career Education and Development at ACU and owns Bright and Associates, a career management consultancy. Email to opinion@jimbright.com. Follow him on Twitter @DrJimBright

These not-for-profits could win $10 million each from Macquarie Bank — here’s how they...

International Expansion: How To Know When Your Business Is Ready to Go Global –...

The hottest ‘Star Wars’ collectible is a character you’ve probably never heard of —...