Priscilla Barolo, a spokeswoman for Zoom, declined to comment. 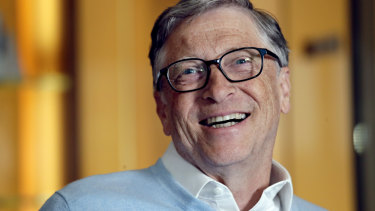 A speech by Bill Gates inspired Yuan to try and make it in the US. Credit:AP

The global video conferencing market is expected to expand almost 8 percent a year through 2026, according to Transparency Market Research, as a growing number of employees work from home. Zoom reported net income of $US7.6 million on revenue of $US331 million for the year ended January, and is now worth nine times the $US1 billion valuation it secured after a funding round two years ago.

Before starting Zoom in 2011, Yuan was an early employee at WebEx Communications, an online conferencing firm, and then worked at Cisco Systems Inc. after it acquired the company for $US3.2 billion in early 2007.

Yuan came up with the idea for Zoom – which counts Uber and Wells Fargo & Co. as customers – after repeatedly travelling 10 hours to see his girlfriend while they were college students.

“Someday, if I can have a smart device and with just one click I can talk with you, can see you, that was my daydream, right?” Yuan said in a July interview with US venture capital firm GGV Capital. “And every day I thought about that.”

Warner Bros.’ DC films are no longer trying to be Marvel, and that’s a...