Woods’s return to the center of golf’s biggest stage will probably drive added interest in pro golf for a while and generate even more attention for his corporate partners. It will also renew debate over whether a healthy Woods can regain the dominance of his early career, when he single-handedly boosted golf’s status around the world.

In the moments after Woods’s final putt on Sunday, longtime sponsor Nike released a video congratulating him on the feat, and highlighting his push to pass Nicklaus. The video uses audio from a 3-year-old Woods listing his golf aspirations.

“To think a 43-year-old who has experienced every high and every low, and has just won his 15th major, is chasing the same dream as a 3-year-old,” the video says.

The ties that bind

No company is more closely associated with Woods than Nike, which signed him when he turned pro back in 1996 and built its golf business around his stardom. Woods was once making $US30 million a year from Nike, according to Forbes, but in 2016 the company announced it would stop making golf clubs, balls and bags. Nike is still Woods’s apparel partner – the red Nike shirt he wore on Sunday is a familiar sight to most fans – but over the past few years Woods has had to look elsewhere for ball and club partners.

Nike shares rose as much as 1.2 per cent to $US87.24 in New York trading Monday. The effect extended to golf brands unconnected to Woods: Callaway Golf gained as much as 4.1 per cent, while Titleist parent Acushnet Holdings Corp. was up as much as 4.2 per cent.

During a decade when Woods’s life was marred by marital trouble, substance abuse, multiple surgeries and inconsistent play, many of the other brands associated with the former star either dropped him outright or failed to renew their partnerships. They included AT&T, Gillette, Buick and watchmaker Tag Heuer.

In their place is a new stable of partners. Monster Energy has been branding Woods’s bag since 2016. TaylorMade is now his club sponsor; Bridgestone makes his golf balls. There are also smaller deals with Hero MotoCorp, an Indian motorcycle maker, and Kowa, a Japanese pharmaceutical company. Several of them sought to capitalise on the moment, with Monster Energy musing what a tiger’s favored color might be. 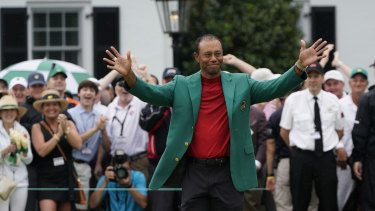 Tiger Woods was once making $US30 million a year from Nike, according to Forbes, but that number has dwindled in recent years.Credit:AP

Woods carried 13 TaylorMade clubs on Sunday, according to Chief Executive Officer David Abeles. While the Masters win is great for the golf business overall, and it’s good for sales when fans see Woods win tournaments using TaylorMade clubs, Woods has helped the privately owned brand in another major way.

Abeles, who declined to provide financial details of the agreement with Woods, said TaylorMade has already seen a boost in interest following the Masters. Phone volume on Monday morning was three times heavier than it was last week, and website traffic after the Masters was double what it was after the tournament last year.

During Sunday’s final round telecast on CBS, Woods’s prominent placement was a boon to many of those brands. Nike saw $US22.5 million in exposure, according to Apex. Monster received $US960,000, while Bridgestone saw $US134,000. Those numbers will increase as highlights and print media push images of Woods’s win across the globe. They’ll also jump at later tournaments that receive a Woods boost in viewership and attention.

At the height of his career, Woods was making $US110 million per year as the world’s highest paid athlete, including that $US30 million from Nike, according to Forbes. Last year the magazine reported his earnings as $US43.3 million.

For now, Woods sounded bewildered at his resurrection to top-dog status.

“I’m kind of at a loss for words,” Woods said after the win. “It’s overwhelming because of what has transpired.”