The NSW Government has agreed to a 12-year lease, with two further five-year options, for the space in 6 Parramatta Square, which was granted development approval last year with 8 Parramatta Square.

“We expect to experience a strong flow of pre-leases off the back of the two anchor tenants signing long-term leases in the project, which is one of the largest urban renewal projects in the country and will see Parramatta city rival Sydney’s CBD in terms of amenity and high-quality commercial space”, Mr Walker said.

Parramatta, in the west, is the fastest-growing satellite CBD in the country, with near to zero office vacancy rates, and will be the main hub for the proposed second Sydney airport at Badgerys Creek.

Ray White head of research Vanessa Rader said Parramatta CBD was growing in favour due to its relative affordability to Sydney, and that quality construction and CBD infrastructure improvements had attracted new occupiers and investors.

“After a robust few years for Parramatta CBD, the six months to January 2019 has allowed the market to take a breath, sit back and watch the construction of both the highly anticipated Parramatta Square and infrastructure projects,” Ms Rader said.

“With no major supply completions being added to stock levels during this period, we’ve seen some subdued take-up in space this period also, recorded at just 923 square metres.”

Walker Corporation has also been successful in securing market-leading financial services group Link Market Services, who will be relocating their Sydney corporate offices from Rhodes to the Parramatta Square development in 2021.

There continues to be strong private and public demand for space in the precinct, with Towers 3 and 4 fully pre-committed, with lessees including National Australia Bank and the NSW Government – secured in an earlier tender.

David Borger, executive director of the Western Sydney Business Chamber, said the Walker Corporation tower in the Parramatta CBD will be the biggest office tower in Australia.

“It is fantastic to see the NSW Government commit to bringing more than 4200 government workers to Parramatta, housed in Walker Corporation’s office tower,” Mr Borger said. 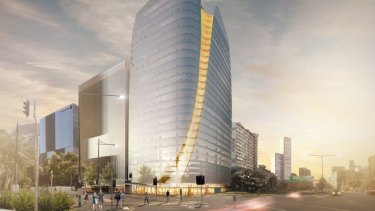 GPT has also expanded its footprint into Parramatta with its 32 Smith Street tower.

Last month the group officially launched the 26,400-square-metre site, valued on completion at about $300 million. QBE will occupy 51 per cent of the building, on which it also has signage rights.

GPT’s head of office and logistics, Matthew Faddy, said 32 Smith would be part of the significant transformation of Parramatta that was already under way.

“We expect the importance of Parramatta as a world-class commercial and cultural centre will only grow, with most of Sydney’s population set to live in the West within the next two decades,” Mr Faddy said.

“The plans for new light rail, West Metro, better motorway connections and large cultural facilities such as the Museum of Applied Arts and Sciences will only add to the appeal of Parramatta as a place to work.”

Facebook’s Zuckerberg went before Congress a year ago — here’s what has (and has...

These are the skills Australia’s innovative companies want from employees