When you rifle around in your purse for some change soon, you might be lucky enough to pull out a new 50 cent coin, launched today by the Royal Australian Mint to celebrate the International Year of Indigenous Languages.

The coin, developed in consultation with Indigenous language custodian groups and designed by the Mint’s Aleksandra Stokic, features 14 different words for “money” from Australian Indigenous languages. But where do these words come from? 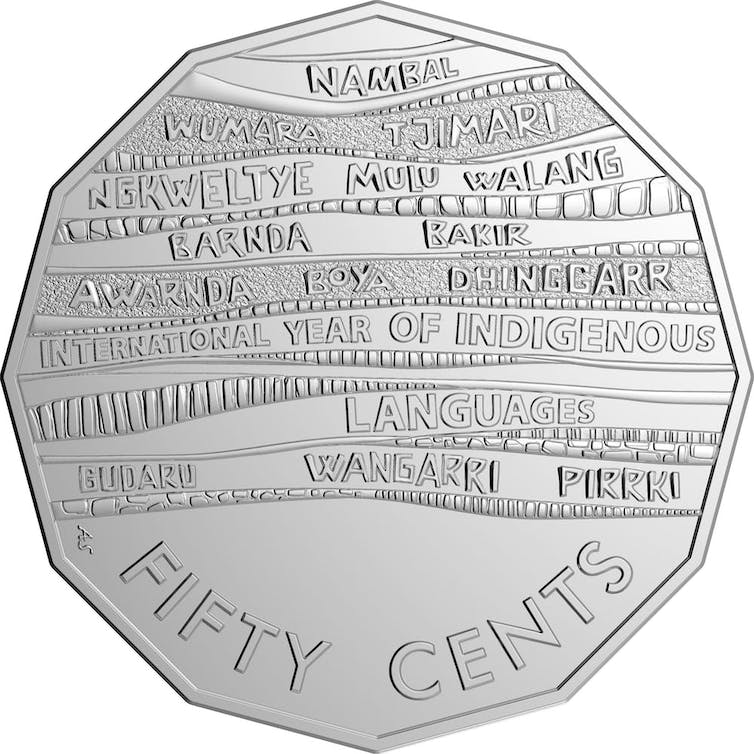 Money, or an object which abstractly represented the value of goods and services, did not exist in Australia before European colonisation. Trade occurred, but it was between items deemed to be of similar worth, for example, pearl shell, quartz, food or songs. With the entry of money into the Indigenous economy, new words were needed to refer to coins and later, notes.

Most Indigenous words for money come from words for “stone”, “rock” or “pebble”, no doubt in reference to the size and shape of coins. On the new 50 cent coin, you’ll find words for “stone” from across Australia:

Kaytetye, spoken in Central Australia, and Kaurna, the language of Adelaide, go against the trend by extending the words ngkweltye and pirrki (which both mean “piece”), to also mean “money”.

Gathang, from the Central New South Wales coast, uses dhinggarr “grey”, perhaps due to the colour of most coins, and walang “head”, presumably in reference to the monarch’s head on the coin. Wiradjuri, from the same area, also uses walang, but in this case it means “stone”. 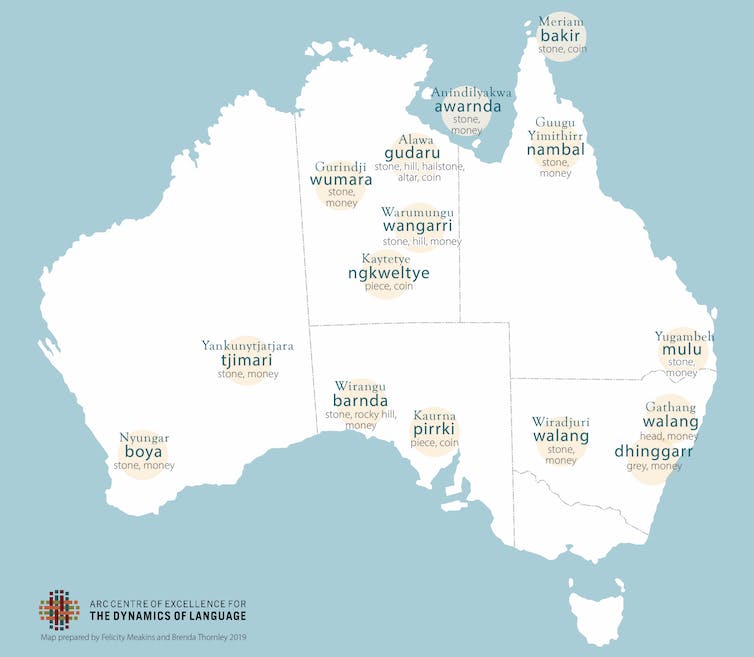 Origin of the Indigenous words for ‘money’ on the new 50 cent coin.
Felicity Meakins and Brenda Thornley

Other words for ‘money’ from Indigenous languages

The diversity of Indigenous words for money on the new coin is an attempt to reflect the linguistic tapestry of Australia, a nation of over 300 languages and many more dialects. However, the words on the coin are just a small sample of Indigenous terms for money.

Some languages differentiate between coins and paper money. Murrinh-patha, spoken in the Daly River region of the Northern Territory, uses palyirr “stone” for coins and we “paperbark” to mean notes.

Other languages have words that vary by denomination. Alyawarr, spoken just north of Alice Springs, uses aherr-angketyarr “lots of kangaroos” to refer to the A$1 coin, and rnter-rnter “red” in reference to $20 notes.

Alyawarr people also say kwert-apeny “like smoke” for $100 notes. This is perhaps confusing at first, until you recall the original light blue and grey $100 note (1984-1996) depicting Sir Douglas Mawson.

In some cases, terms for money have been borrowed from other languages. The English word “money” has been given a local flavour by different languages, for example: mani/moni (Kriol) and maniyi or tala (Warlpiri).

Another borrowing comes from Australia’s close neighbours. The legacy of 18th century Macassan traders from present-day Indonesia remains in words for “money” originally derived from rupiah (Indonesia’s word for currency). These include rrupiya (Mawng, Burarra, Djinang) and wurrupiya (Tiwi). (And note that Tiwi also uses wurrukwati “mussel shell” for “money”).

Probably the most innovative borrowing for money, still used throughout south-western Queensland, is banggu. The word derives from bank and –gu, the latter being used to express ownership. So banggu literally means “of the bank”, and perhaps emerged during the period in Queensland history when the state government was withholding wages from Indigenous people. These stolen wages are now thought to be worth as much as A$500 million in banggu.

Indigenous Australians have not always been well represented on Australian currency. Take the bark painting by David Malangi on the back of the old $1 note released in 1966, which was used without consent or acknowledgement, or the first polymer $10 note, released in 1988, which featured an anonymous Indigenous man painted up for ceremony.

Contrast this to 1995, when the Indigenous man on the $50 note was named as the first published Indigenous author, Ngarrindjeri writer David Unaipon, or 2017 when a commemorative 50 cent coin was designed by Boneta-Marie Mabo and released for National Reconciliation Week.

The use of multiple words for money on the new coin challenges the myth of a single Australian language. It also represents a shift to naming and individuation: from depicting Australian Indigenous people and their languages as a single group, to recognising the diversity of these groups and their languages.

This article is republished from The Conversation under a Creative Commons license. Read the original article.

Site highlights each day to your inbox.

Architect of two strikes system claims it is doing its job

Stretching Basics – Use it Or Lose It